Rising Self Made Multi Millionaires Fahad Al Sufayeh and Omid Rahravani Are Expanding Globally in the Field of Artificial Intelligence, Blockchain and Internet of Things (IoT) Estimating Market Cap to Reach US$950 Billion by the Year 2024 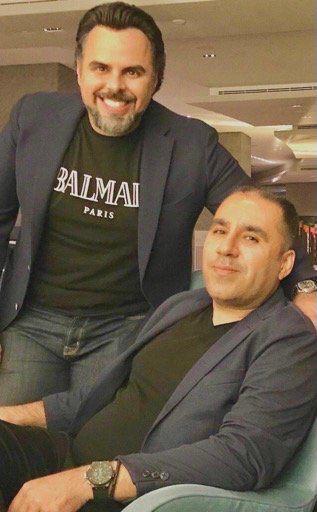 Kuwait City, Kuwait, 2nd Dec 2021, ZEXPRWIRE, Self-made Multi-Millionaires , Fahad Al Sufayeh & Omid Rahravani who have been introducing new technologies to the Middle East and have been recognized and trusted by International enterprises around the world for brokering over $400 million worth of technology contracts are expanding their influence globally to new markets .

Fahad Al Sufayeh & Omid Rahravani have been for their impressive portfolio of success working on a diversified range of projects in the field of artificial Intelligence, Blockchain and Internet of Things (IoT), these two entrepreneurs are determined to help evolve the future technology landscape of the Middle East and new fresh markets .

They were proud to be the trusted advisors for the Richardson-based company Prodea Systems Inc owned by the celebrity astronaut Anousheh Ansari who is one of the richest Iranian Americans in the world with a net worth estimated at $750 million. Anousheh was the first self-funded Muslim female space tourist flying to the International Space station. She is also the co-founder of The Billion Dollar Fund for Women and is the CEO of XPRIZE Foundation, a $10 million competition that ignited a new era for commercial space flight. These entrepreneurs strongly believed that artificial Intelligence and Internet of Things (IoT) is the future, that is the main reason they had invested a fortune marketing Prodea Systems Inc in the Middle East region and highlighting its achievements. Prodea Systems had estimated that the worldwide market for IoT products and services could be as much as $5 trillion.

Fahad Al Sufayeh is married to a princess from the Royal Family of Kuwait , he is the son of one of the first diplomats and politicians in Kuwait which have extended family ties to the former Amir of Kuwait, Sheikh Sabah Al Salam Al Sabah, who ruled during the years from 1965 -1977, and to the recent Crown Prince Sheikh Meshaal Al Ahmad Al Jaber Al Sabah.

Omid Rahravani is an American from Los Angeles with Iranian roots who during his younger years grew up in Kuwait because of his father moving there in the 1950s to start one of the first petroleum and oil lubricant distribution companies, that has been a great success until this day. His father was a self-made success and a leader in the automotive oil lubricant business . Omid Rahravani started his career as a financial advisor for the prestigious Wall Street brokerage firm Morgan Stanley decades ago , based in the former World Trade Center in New York which manages over $1.1trillion. Moving on his journey in life , he has earned his trust as a strategic advisor for international investors, royal families and global companies looking to expand into the Middle East.

Recently these two Multi-Millionaires Fahad Al Sufayeh and Omid Rahravani have taken the direction of philanthropy by launching their latest woman empowerment masterpiece project called Woman PWR™ Foundation with the goal of starting a positive journey empowering women around the Middle East , helping them achieve their economic growth .

To expand the Woman PWR™ Foundation awareness around the world , Fahad Al Sufayeh and Omid Rahravani invested heavily and acquired a Delaware tech corporation called DayPlanz®, founded in year 2015 headquartered and operating from the prestigious Marina Del Rey California area known as silicon beach. This strategic investment approach main goal is to expand connecting Middle Eastern woman entrepreneurs with international successful woman entrepreneurs from different cultures around the world . DayPlanz® main goal is to create a global social application platform dedicated for successful female entrepreneurs to connect anywhere and anytime around the world by networking and sharing of their experiences .

These two successful entrepreneurs also have a passion for investing in startups, especially at seed and growth stages , offering startup opportunities to their exclusive network of ultra-high net worth individuals around the world. They are leaders and experts in introducing new innovative technologies to the Middle East region, and are constantly on the lookout for the next big thing.