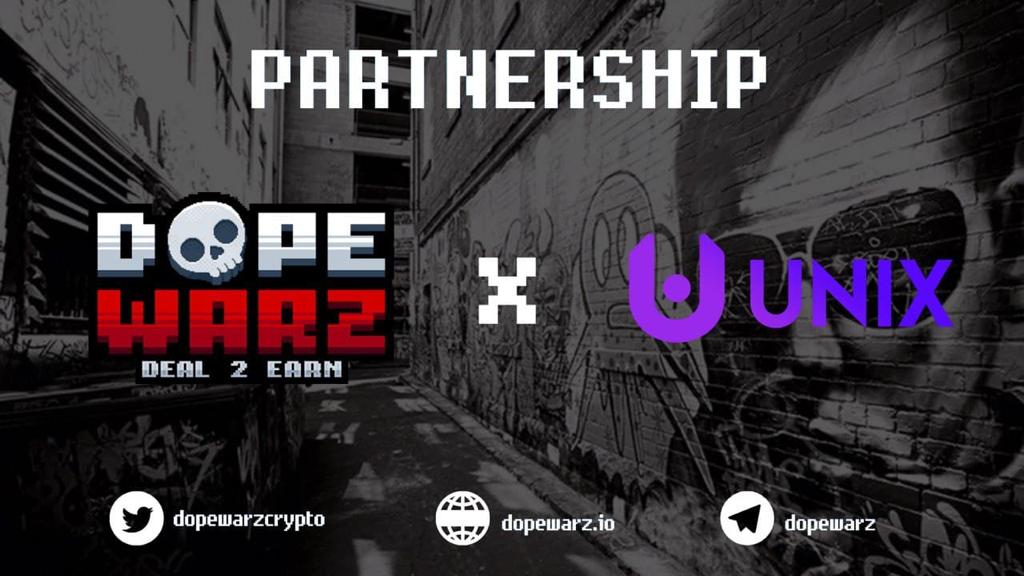 BECOME A KINGPIN OF THE METAVERSE WITH DOPEWARZ. DopeWarz origins lie in the early 90’s MS-DOS Drug Lords game but has been updated and dramatically enhanced into a blockchain based MMO experience where you buy and sell drugs to create and expand your drug empire, increase your influence across different Cityz & BlockZ and upgrade your in-game characters "DopeZ" and operational centrez (DOZ).

Combining the entertaining and addictive nature of being a gangster for a day, with the ability to earn real world tradeable assets, DopeWarz plans to become a metaverse with an in-game virtual economy mimicking the supply and demand models in cities around the world.

The DopeWarz seed fund raised over US$850,000 in under 48 hours with the IDO due to go live in early December and with a solid team in place the sky is the limit. The collaboration with new partner UniX further enhances DopeWarz ambitions by connecting the UniX community and thus offering them an additional platform to enhance the UniX Foundation Scholarship Scheme.

UniX is a world-leading play-to-earn gaming platform that helps investors and gamers profit through gaming. But that’s just the tip of the iceberg. In a revolutionary act of corporate social responsibility, the Unix Foundation is a scholarship fund and to date has created the biggest gaming community (“guild”) worldwide, with more than 160,000 members. Unix provides training management and support to chosen talent from developing and under-privileged countries, assisting entry to platforms that would otherwise be financially out of reach. One example of support is loaning existing and valuable NFT’s to advance a gamers progress in a profit share agreement.

By teaming up with DopeWarz, it enables UniX to bring their community to another table at which they may further grow the Guild. DopeWarz and Unix has also invested into each other, showing trust and allowing seamless integration and synergy.

DopeWarz CEO and Founder Spencer Tarring said: “We are delighted to be partnering with Unix and not simply for their fantastically inspiring philanthropic work. Moreover, as leaders and early pioneers of the play-to-earn revolution, UniX will bring another level of expertise to the already very strong foundation that makes up the heart of DopeWarz.”

Unix Co- Founder and Head of Partnerships Erik Mayer said: "We are extremely excited to be working with DopeWarz. It’s a bold and intriguing platform that takes its origins from a classic game with massive playability. We can see our community latching on and turning this into a serious MMO."

DopeWarz is a comprehensive Metaverse, full with a virtual economy that enables people to buy and sell virtual DrugZ to earn real world tradable assets.

UniX is bringing a play-to-earn revolution that allows gamers and investors to gain ownership of in-game assets. Players can actively increase the value of their holdings by playing the game. Following the typical play-to-earn gaming model, UniX rewards all the players for their time and effort put into the game.